Home/-, Ethereum/Business Giants to Announce Creation of a Computing System Based on Ethereum

SAN FRANCISCO — Microsoft, JPMorgan Chase and other corporate giants are joining forces to create a new kind of computing system based on the virtual currency network Ethereum.

Some 30 companies are set to announce on Tuesday the formation of the Enterprise Ethereum Alliance, which will create a standard version of the Ethereum software that businesses around the world can use to track data and financial contracts.

The new organization, a nonprofit, is part of a broader movement to harness the technological concept known as the blockchain, which was introduced to the world by Bitcoin.

Blockchains offer a way for unrelated computers and companies to simultaneously collect and store information without relying on a central authority, similar to the way that Wikipedia is written and maintained by a group of writers and editors rather than a single author.

The technology is viewed as being harder to corrupt or hack because of its reliance on many people rather than a single authority.

Many big corporations have been looking for ways to use blockchain technology to keep track of information created by unrelated companies, like stock and bond trading transactions.

IBM has made a particularly big push into the blockchain business, and it has been leading a separate collaborative project, known as the Hyperledger Foundation.

The new Ethereum alliance has been described by some of its backers as a way to ensure that the IBM-led blockchain effort is not the only option for businesses looking to use the technology. Other companies like R3 and Chain have also been developing alternative blockchains.

“We are pretty equally spending our time across the different chains,” said Alex Batlin, the global head of blockchain at Bank of New York Mellon, which is joining the Ethereum alliance.

Ethereum was introduced in 2013 by a developer named Vitalik Buterin, then 19, who had previously worked on Bitcoin. Since its official release in 2015, the Ethereum network has been the target of hackers and theft.

Yet it has also won a large following among programmers who view it as a new and sophisticated way for groups of people and companies to initiate and track transactions and contracts of all sorts.

That has led some companies to bet that Ethereum will win the race to become the standard blockchain for future business operations.

“In every industry that we come across, Ethereum is usually the first platform that people go to,” said Marley Gray, the principal blockchain architect at Microsoft.

The creation of the Ethereum alliance shows a continuing commitment among big companies to making the technology work, in large part because it promises to create much more streamlined databases that require less back-office maintenance.

Accenture released a report last month arguing that blockchain technology could save the 10 largest banks $8 billion to $12 billion a year in infrastructure costs — or 30 percent of their total costs in that area. Accenture is one of 11 companies on the governing board of the Ethereum alliance.

The current Ethereum network has an internal virtual currency known as Ether, the value of which has risen and fallen over the last two years. On Monday, a single Ether was worth around $15, and all the outstanding Ether were worth around $1.3 billion.

Ethereum, however, is much more than just a system for tracking currency. It also allows people to write what are known as smart contracts into the Ethereum blockchain. Two companies could, for instance, create a contract that would automatically send money to one of them if a particular news authority reported that the Chicago Cubs won the World Series or that “La La Land” won the Oscar for best picture. (As the latter example shows, what would happen if the authority was wrong is a more difficult question.)

Because of its capacity for smart contracts — and other complicated computing capacities — Ethereum is viewed as more agile and adaptable than Bitcoin. 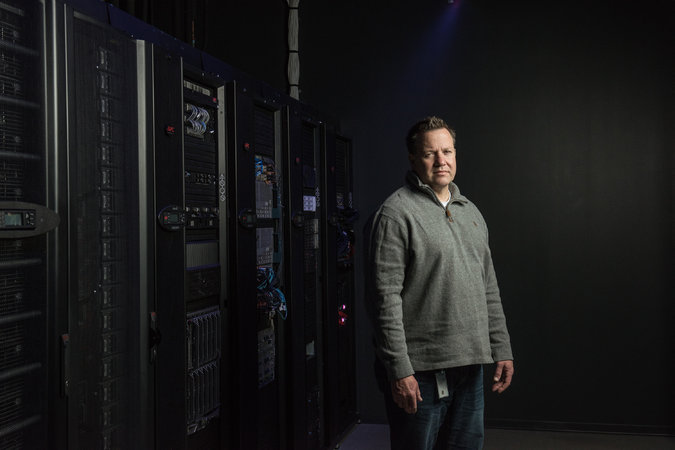 “In every industry that we come across, Ethereum is usually the first platform that people go to,” said Marley Gray, the principal blockchain architect at Microsoft. CreditGeorge Etheredge for The New York Times

The companies working on the Enterprise Ethereum Alliance want to create a private version of Ethereum that can be rolled out for specific purposes and be open only to certified participants. Banks could create one blockchain for themselves, and shipping companies could create another for their own purposes.

The purpose of the alliance is to create a standard, open-source version of Ethereum that can provide a foundation for any specific use case.

The private systems are not likely to require an Ether virtual currency, although the companies are hoping to create modules that will allow users to put in and take out individual elements of Ethereum as they choose.

Many companies have already been working to create their own versions of Ethereum for specific purposes.

JPMorgan, for instance, has created a version of Ethereum known as Quorum that the bank has been using in tests to move money between JPMorgan branches in different countries. Quorum will become a part of the new version of Ethereum being developed by the alliance.

Some of the companies working in the new alliance hope that the private Ethereum blockchains will, at some point, be able to connect to the public Ethereum blockchain, creating a standard for information storage and movement around the world.

“Even if you create private networks, if you can anchor them to public networks, you get an extremely strong set of links together,” Mr. Batlin, of BNY Mellon, said.

The work on Ethereum has continued despite an attack on an Ethereum project last year in which a hacker gained control of more than $50 million worth of Ether.

Mr. Batlin and others involved in the Ethereum Alliance said the way the Ethereum developers had handled that attack convinced them of the maturity of the technology.

Today, Ethereum has a larger community of volunteer developers, and more computers on its network than Bitcoin. And the members of the new alliance — which include Banco Santander, BBVA, Credit Suisse, ING, Intel, Thomson Reuters and UBS — say the real-world testing of Ethereum makes it stronger than the alternatives.

“Ethereum has this massive advantage of having the public network that has been tested for two years,” Mr. Gray, of Microsoft, said.